With late June and the Pembrokeshire Coastal Path walk looming ever closer, it seemed like a good idea to to a bit of hill walking and to do some camping at the same time, with the sort of kit that was going to be needed in Pembs, I decided on a weekend in the Chilterns involving 3 nights’s camping and a total of just over 30 miles of walking.

Sadly, for very good reasons, my two pals were unable in the end to join me for this and I was beginning to get a bad feeling about the whole weekend. I kept an eye on the forecast, which was generally pretty favourable and decided that it would be OK to reduce it to 2 nights’ camping with marginally less walking. Definitely, the tough day would be from Wendover station to the Bella Vista campsite near Radnage, which is something like 12 miles. I was preparing myself psychologically for a weekend as Billy No-mates when my walking pal Katie said she would join me for the Saturday. So after a bit of preparation we met at Marylebone with a view to following my planned route but Katie getting on a train back to London at Saunderton station.

We arrived at Marylebone within minutes of each other, bought coffee and (for me) a second breakfast of pain au raisin, since my first breakfast had been so long ago, and then boarded the train. It takes only about 45 minutes to get to Wendover and as soon as we had exited the station, there was a bridge across the railway and a main road and we were Out In The Country and climbing up towards some viewing point or other. 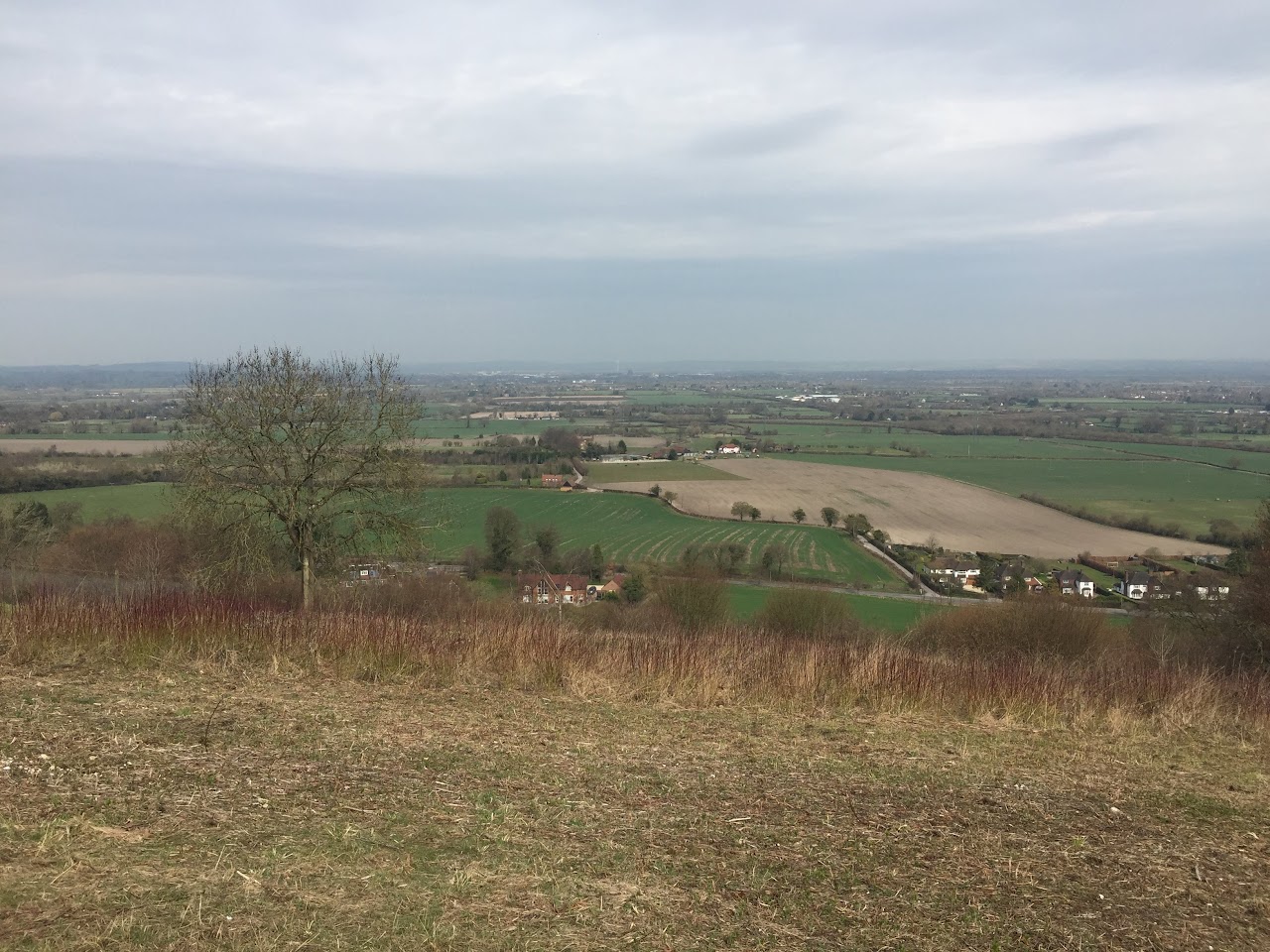 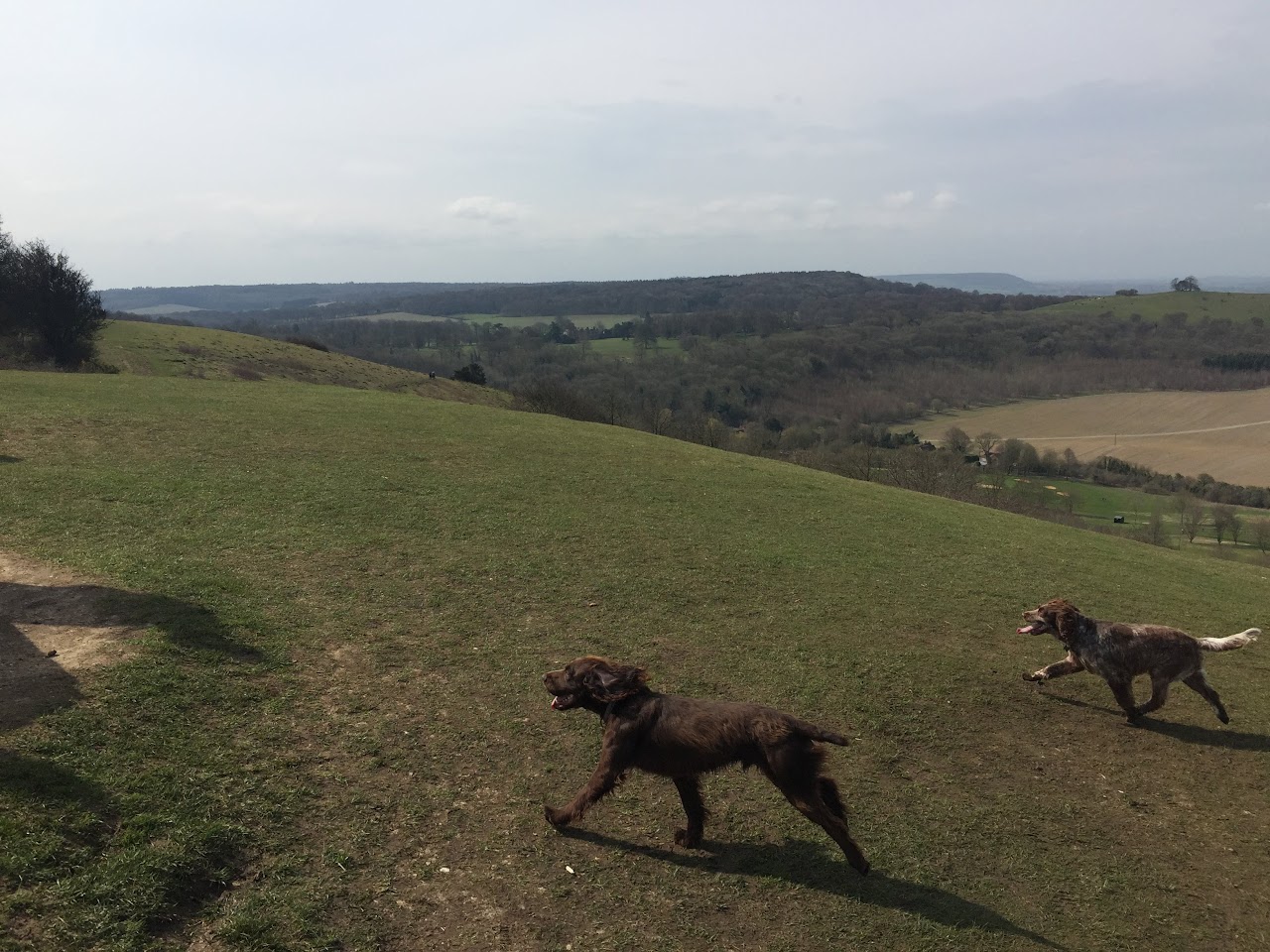 Chequers, and the Dogs of War 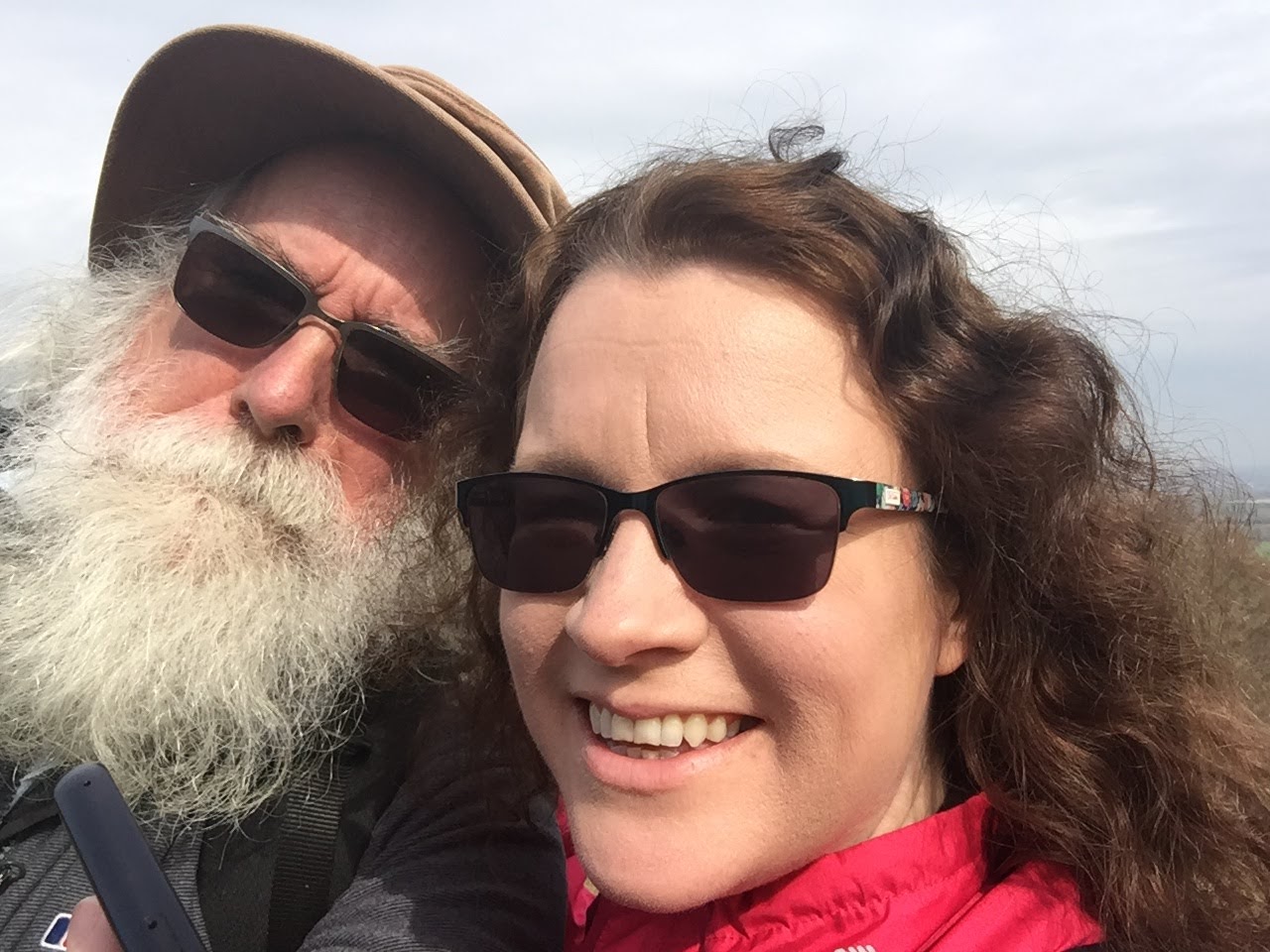 Inevitable selfie. There was supposed to be some landscape, but it was eclipsed by excessive amounts of hair…

From this point, we encountered mud. Lots of it. It became very difficult at times to find a path into which we did not sink ankle-deep. There had clearly been plenty of horse activity in the area and that was the cause of a good deal of the churned-up ground, but also there was quite a bit of tree removal going on. This, allegedly, is to allow more sunlight into the afforested area to encourage new growth and wildlife, but the enormous tyres on vehicles designed to transport half a dozen mature beech trunks around the place leave some pretty big ruts in soft ground, and those ruts have a habit of filling with water.

We encountered a farm shop and that was also selling tea and cake. I suggested that we might partake, but Katie seemed to want to press on so that’s what we did (to be fair, I wasn’t properly hungry at that stage, but I’m not normally one to miss an opportunity for a cuppa and a slice of cake…). We had to negotiate a road, but found that there was a footpath in some woodland just behind a hedge, but it was, again, remarkably muddy.

I was pretty pleased with the fact that I was making perfectly reasonable progress despite having a 12kg pack on my back. A few days ago I pulled some random, probably unread, volume from the shelves above my desk. It was entitled “Walking the Alpine Parks” or some such, a book I had no recollection of having bought, and one which was redolent of unfulfilled ambition, and I found a section in the book giving advice on how quickly you should walk when in the hills and mountains. The author opined that the vast majority of people set off far too quickly and exhaust themselves. His advice was to keep to about 60 paces per minute on the flat, lowering that to about 40 paces whilst climbing. So it was that I was consciously keeping my pace down and trying not to raise my heart or breathing rate too much. We made pretty decent progress and, given that we stopped to admire the view, take photos, or just negotiate our way around quagmires or through undergrowth, I was quite happy that we completed our first 3 miles in considerably less than 2 hours.

At one point we were walking along a very muddy track with a fence on either side when two horsewomen hove into view. We conversed as they approached and the second horse was almost past us when it suddenly panicked and shied away from me quite violently. The rider took it under control but again as we tried to walk past it, so it panicked again. I have to say that I’m not a great fan of having half a ton of horseflesh flailing about within a close proximity of my head and I was damned glad when we were past them. “I think she’s frightened of your backpack…”

Soon afterwards, we arrived at the Pink & Lily, our scheduled lunch stop, and one I would recommend. The main courses weren’t cheap and to be fair, neither were the sandwiches at £7.50 a go, but they came with chips and salad, so plenty of carbs to sustain hungry walkers. I had sausage sandwiches, Katie roast beef, washed down with a couple of local ales in my case, and a Fentiman’s ginger beer in Katie’s.This was at about 6.5 miles and that took us considerably less than 4 hours.

We walked down to Lily’s Bottom and she didn’t seem to mind at all, and from that point we found ourselves in Grim’s Ditch. This definitely lived up to its name with yet more mud. For a fair bit of it we walked in the field next door, which had a hardened vehicle track and was much easier, but after a few hundred yards of this we found an adequate gap in the hedge and rejoined the muddy track as it descended to Lacey’s Green. 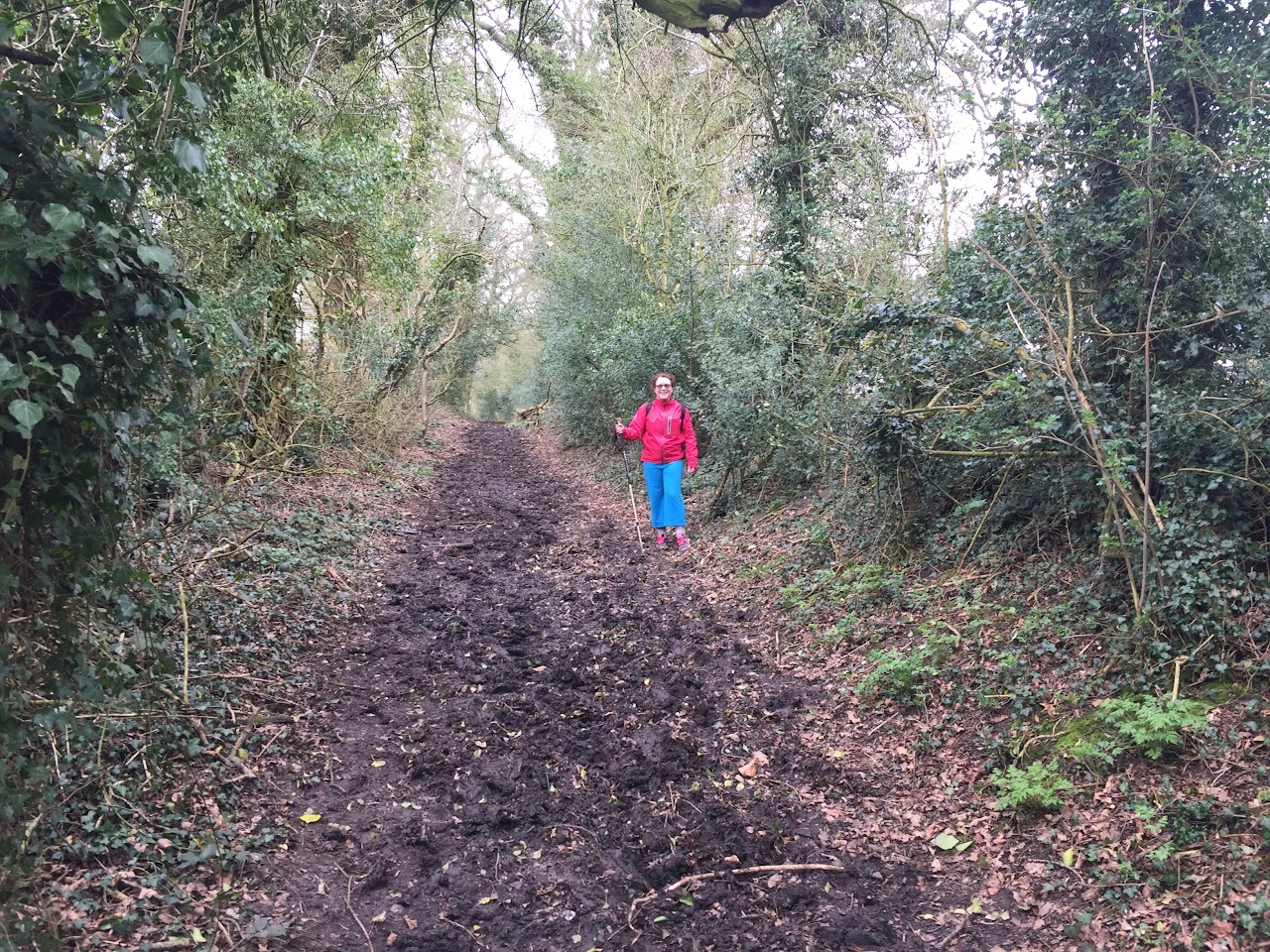 It was at this point that a small navigational error cost us a few minutes but we were soon back on our appointed quagmire towards Smalldean Lane, and the mile or so of road walking to Saunderton Station. I had been weighing my options during the past couple of miles and although I had no particular qualms about camping, I wasn’t looking forward to another long trudge in what promised, the weather forecast having changed rather, to be very wet conditions the following day. My navigational aids, my Garmin and OS 1:25000 maps on my phone, were both “touch-screen” devices and I know from personal experience that such technology goes totally haywire when the screen is wet, and being constantly bombarded with raindrops. So, providentially, when the one-train-an-hour turned up dead on cue just as we arrived on the platform, I caught the same train as Katie and we spent a little time drinking beer in the Beehive Pub, just of Baker Street, before I returned to Southend in a totally knackered state.

The main walk between Wendover and Saunderton was measured by the Garmin as 9.34 miles, but it’s over a mile from my house to Southend Central, and then of course there’s the general walking between stations, which must have been at least another mile. I’d call that a 12 mile day.

This site uses Akismet to reduce spam. Learn how your comment data is processed.